Listed by author, with the title of the article then its description immediately below. Order of Authors: Shai, Zyler, Shazz, George, John-Z, Sayan and Official/Core-team. @0x3639 @ZNNAYIID @DrD3

NOTE: My descriptions are brief 1-2 sentences. They are just suggestions, feel free to edit them as you want. The order presented here is just in the order I have done them, totally up for debate how you’d like to present them or group them on the website, or if all of them will be included or not.

NOTE 2: I have not summarized all of the official/core team articles, as some are very old or no longer relevant, but very possible I missed something which should be included. I have also not talked about videos (they are brief enough to just watch for now?) or NFTs (don’t know enough about them/premature at this stage)

NOTE 3: I have also included at the very end two links to the Bitcoin Forum Post introducing Zenon. Original was in 2018, then moved to a 2020 post.

ZYLER/SHAZZ/anyone who also contributed
The Mega FAQs
A comprehensive collection of FAQs which evolve as the project does.

The Zenon Enigma
A community member’s recollection of xStakes and the critical thinking required by early investors.

A Concise Overview of Zenon
A brief introduction to Zenon Network with some starter links.

How Zenon Mirrors The Bitcoin Ethos
An examination of the ways Zenon reflects Bitcoin in its inception, trustless nature, culture, governance and innovation.

The Power of NFTs on Zenon
An introduction to NFTs for beginners, as well as talk about how Zenon can solve current problems with NFTs.

An Alien’s Thesis For Zenon Network
An investor’s thesis for Zenon, done in a non-traditional style and based on what was available to the community in mid-2022.

Zenon Network: An Introduction to Governance
An introduction on how to educate ZNNAliens, the pillar-delegator relationship and some case-studies of the DAO in action.

Zenon Network: Game-theory for Progressive Decentralisation
A discussion of the game-theory of Zenon across tokenomics, demographics and egalitarian launch in relation to its progressive decentralization.

Zenon Network: How to Apply for a Funding Grant
A step-by-step tutorial with pictures for how to apply through Accelerator-Z for funding from the DAO, including how to break up funds over phases.

How To Buy $ZNN Using Pancakeswap
A very beginner-friendly guide for buying wZNN on BSC from pancakeswap, including pictures for every step (and utilising the 2-way BSC bridge active from start to end of 2022).

Forget web3, It’s Time For Zenon
A beginner-friendly article on web3, decentralization and some infographics for Zenon.

Hello, this is Zenon
From the awareness initiative of January 2022, a discussion of six reasons why speculators should consider investigating Zenon further.

Zenon Network: A Noir Story
An article-story hybrid which delivers critical thinking about the execution of xStakes, the egalitarian launch of Zenon.

Zenon Network: A Zenocracy in Peril
A continuation of the prior story. Pure fanfic fun which touches on cultural elements of the community.

2022 Edition: Tales from Zenocratez
A comedic article covering the history of Zenon from the alphanet launch until mid 2022.

An Ape’s Guide to the Galaxy
A comprehensive summary of Zenon Network for anyone looking to do their due diligence.

The Zenon Deck
Concise documentation which explains the technical, economic and values which underpin the community essence.

Zenon Network Liquidity Mining
An article on QSR and earning it as a Liquidity Provider.

An Ape’s Guide to run a full node on Windows 10
A guide to help Windows users run their own node before the embedded node was available in SYRIUS.

A Message to Humans: An Alien’s Guide to Lightning Network Watchtower Limitations and Beyond
A discussion of the Lightning Network’s limitations. Its Watchtowers arguably require a degree of trust, the author suggests a decentralized network could solve for this.

Web3 is Dead: Longlive Accelerator Z
A discussion of web3, and thoughts on the Accelerator-Z program with examples for SDKs, CEX listing etc. Also advice for pillars and for proposals.

Zenon Social Analysis
An article examining the results of multiple surveys given to ZNNAliens, with suggestions moving forwards based on shared values.

How To Not Fracture A Layer-1 Chain
An article discussing in-depth the proposed tech in the whitepaper. Examines the issue of scalability and how a dual-ledger with unikernals could solve for this; based on what was known in mid-2020.

Zenon - Community Generated AMA
July 2020, the first chance investors had to engage in an AMA with the core team. 28 varied questions.

Zenon - Community Generated AMA edition 2
Nov 2020, the second chance investors had to engage in an AMA with the core team. 20 varied questions.

Zenon - Community Generated AMA Alphanet edition
Oct 2021, the third and final chance the community had to engage in an AMA with the core team. 39 varied questions.

Project Quasar
An introduction to the second coin, QSR/Quasar, its use-case and plan for distribution.

Mission 2022 – Network of Momentum – Atomic Era Roadmap
A general roadmap presented to the community for milestones such as an embedded node, Hyperspace, Accelerator Z and later Vested Pillars.

Zenon Fabric – Paving the way for mass-scale adoption
An introduction to Accelerator-Z and Vested Pillars.

Orbital Program: Protocol Level Liquidity
An overview of the various ways to earn rewards in Zenon’s ecosystem, as well as the allocations for each reward pool such as the % of daily minted ZNN for a sentinel vs pillar etc. (relevant for the Alphanet).

ZNN & QSR Rewards Specifications – Alphanet Update
Further information pertaining to earning rewards in the Alphanet, including the rewards emissions for each token.

Full Node Invasion – Network of Momentum Phase 0
An article explaining what is a node, why run a node and instructions for doing so (made far simpler with the now-available embedded node in SYRIUS).

The New NFT Standard: When Cryptography Meets Steganography
A discussion on the interesting history of Steganography and how this can be implemented with NFTs.

Hyperspace x Accelerator Z: Towards a DAO of DAOs
A comprehensive discussion on receiving funding from the DAO. Also has suggestions for the needs and wants of the network.

BITCOIN FORUM POST
This is a repost of the original post introducing Zenon to the Bitcoin Forum in 2018, May 25th.

And just my idea for a “culture section” if we’re doing that: 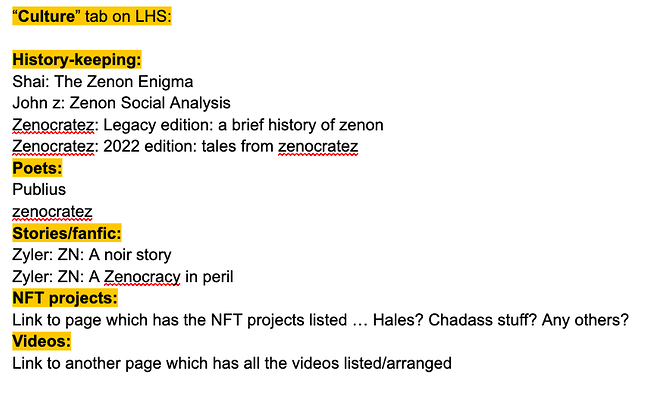 Crypto Publius is an anon artist whose poetry captivated the early ZNN community. The colorful lyricism and deep meaning of his words formed a gravitational pull that kept investors thinking and wondering about Zenon. His stated goal was to alert the public to Zenon, as a public service – but for many his real value was in teasing the audience towards the edge of the rabbit hole. At that point, all it took was a gust of cosmic wind and their lives were changed forever.

Zenocratez is the poor man’s Publius. A degen fan so hopelessly in love with his idol that he posts frequently, tirelessly trying to recapture the magic of the dormant Publius. While he has a small and loyal following, it pales in comparison to the legion of admirers that Publius effortlessly commands. Zenocratez is a man that has a lot of feelings – but he is also a peak autist. For maximum entertainment, be sure to check out his failed AZ applications and the corresponding poetry detailing his heartbreak and angst.

And i noticed there was some soft schizzo material in the other post … perhaps this can be the final section in the culture tab? I’d be in favour of including it, and also concluding it with something which is to the tune of “Finding out more is left as an exercise to the reader” … but up to you guys!!