Syrius: Some proposals not displaying when "Only accepted" is toggled

I did some research in this bug and found the cause. 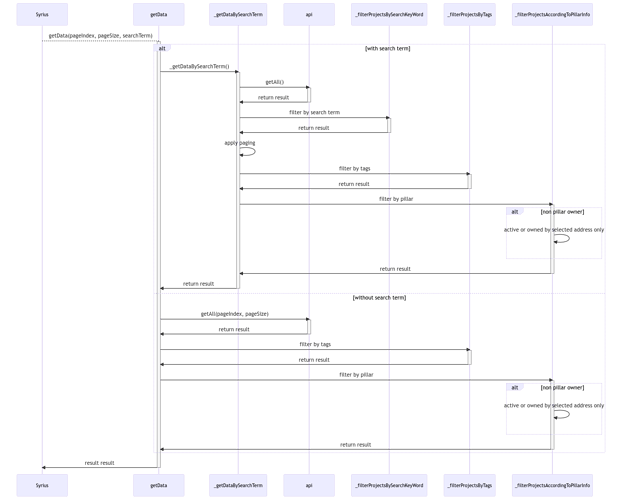 The bug only occures when no search term is used.

When no search term is used, the getAll(pageIndex, pageSize) paging method is used. The paging variables are supplied by the infinite_scroll_bloc.

The infinite_scroll_bloc uses a static pageSize of 10.

The getAll method returns 10 project, 6 of which are rejected or completed. The user applies the “Only Accepted” filter which filters the initial 10 results down to 4.

The infinite_scroll_bloc checks if it has reached the last page with the following check.

Because the result was filtered down to 4, the infinite_scroll_bloc thinks it has now reached the end and shows no more results. Causing possible other accepted projects to be dropped.

In general a paging method cannot be used if filtering is applied at a later stage.

Use the getAll() non-paging method and apply paging after the search term, tag and pillar filtering.

This is by design but defeats the purpose of having the “My Projects” and “Only Accepted” filter tag when a user is not a pillar owner.

Yes, I noticed the logic for the proposals didn’t produce expected results if both checkboxes were ticked (i.e. double filtering).

I can post my atomic swap checkbox logic, if you want to compare.

This is by design

Maybe we hide the checkboxes if a selected address isn’t a pillar. Easy change via Visibility widget. Let me know if you want assistance.

I pushed my solution to the fix-az-list branch.

The filter needs to be inclusive.

The filter tags still make sense when implemented this way. For example for completed or rejected projects.

You can open a PR and I’ll merge it if it’s tested and works.

On which repository should the PR be issued exactly?

I’ll merge it here and will be available in Syrius v0.0.6.

Both PRs are merged, thank you!

I will test on mac again today.