In order to make wZNN accumulation more attractive to buyers, what do you guys think of the idea of developing a campaign to deepen the liquidity of the asset on pancake. There’s lots of slippage atm.

Though the more $wZNN diverts from $BNB, the less $wZNN and the more $BNB one will hold in his LP position. For someone looking to accumulate $wZNN, this may seem unattractive.

@Shazz would you have a link to that article you wrote on the liquidity topic?

Here is Shazz’s article on liquidity from late march this year:
https://shazzamazzash.medium.com/zenon-network-liquidity-mining-d16a1fb2b6e6

I very much like the idea. Note that current LP rewards are still paid only in QSR until orbital kicks in (after all QSR have been depleted as LP rewards). After that iirc LPers will earn the same znn and qsr emissions as sentinels.

Since we dont have wQSR yet we would have to convince LPers of QSR’s future value so that they’re interested in accumulating it (we just gotta spin a narrative around why QSR will be valuable) OR we take care of the wQSR bridge first.

In any case, more liquidity and depleting that QSR pool so that orbital can kick in is key.

Ohh, was kinda hoping we’d be given the znn portion of orbital rewards retroactively (since Orbital rewards are still accruing) once it actually kicked in 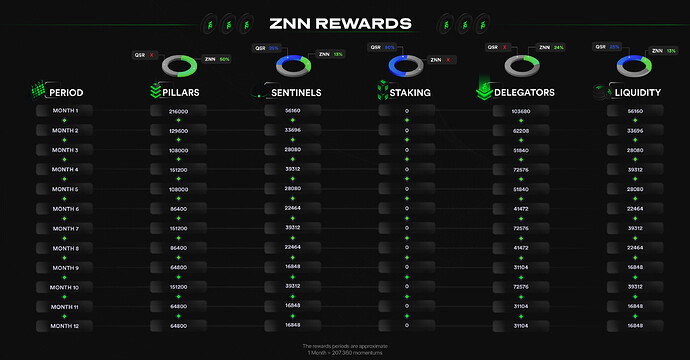 According to ZenonTools our total liquidity on pcs is 275k usd- roughly amounting to 474BNB to constitute its half. We need like what 1500bnb more for it to hit the 2X and then another 1000 for 3X?

The fact that this dynamic multiplier continues until the 1.8million QSR is depleted really makes it a lucrative opportunity for the first movers! We should market it this way but yes in agreeance with Shazz we would either need a wQSR bridge to be created or really have to shill the shit out of NoM and highlight the value of QSR to a whole new crowd.

The question to ask is why there is such a small amount of liquidity despite all the high volume, experienced long term participants?
Pillars are MUCH more lucrative and less risky.
As long as the top 30 pillars are returning 105% there is little incentive for the OG’s to run greater risk to earn an 85% return.

I think the answer is to help increase the price of ZNN. That is why Pillars / OGs should do it. Rewards as a pillar don’t mean anything if ZNN goes to zero.

Are rewards paid in wQSR or are they native QSR?

Native QSR. Don’t think wQSR exists as of yet. You mention the syrius address you want your QSR delivered to while adding liquidity on pcs and it gets delivered there on a daily basis (when things runs smoothly).

Now is the best time to do it while volatility is “low”. I guess the only thing out there is BNB getting whipsawed due to the SEC investigation. I will consider joining in.

@romeo I think you are in the LP pool. How is it going?

The rewards are sporadic but eventually always show up and until I decide to construct a pillar it is probably a good option for maximizing returns.
Ironically, until the 2x kicks in there is a disincentive for LP providers to encourage others because it dilutes the reward. (Similar to the way my delegating to your pillar actually decreases the individual rewards for others unless of course the delegation pushes a pillar to top 30 status.)

We should market it this way but yes in agreeance with Shazz we would either need a wQSR bridge to be created or really have to shill the shit out of NoM and highlight the value of QSR to a whole new crowd.

Perhaps we can first push the build of the bridge? We can then ask Rango to list it.

Sounds like you may have misunderstood how pillar rewards work.

What I don’t understand is your reply. I do understand pillar rewards and LP rewards.

I could be wrong I suppose.

And I’m always doing research. Thanks

Pillars aren’t that much more lucrative (the current 105% apy is before reward shares are taken into account and they only apply to the 15k znn of the pillar) and their risk is considerably higher since they’re locked in for a long time and have sunk costs of at least 150k qsr.

If a pillar is not in the top 30 and doesnt share rewards it barely outperforms sentinels which currently have no infra costs and dont have to burn any qsr.