I sent several listing requests to CEXs and I’ll share the “pitch” here for anyone to edit & use for other CEX listing requests. Don’t just copy-paste it but make sure to replace the [CEX NAME] placeholder with the actual exchange name.

Zenon is one of the only projects that religiously emulates the original bitcoin cypherpunk ethos. The core developer team is anonymous and has produced >1m lines of code in 4 years. The funding source is a mystery but there is no doubt they are professionals (it’s assumed Bitcoin OGs given the vision of achieving Bitcoin interoperability by leveraging Taproot has been repeatedly communicated by the core team). The community assumes Zenon will ultimately become a standalone L1 while acting as a sidechain for Bitcoin (and others).

There has been no team pre-mine, no pre-sale rounds, no insider or VC allocations. The initial distribution was 100% public with the same conditions for everyone. Initial BTC contributors were algorithmically refunded their BTC over a timeframe of 18 months (therefore, the initial distro technically wasn’t a sale but more like a bond).

[CEX NAME] would be the first decent CEX ZNN is listed on and you would become the primary trading venue for the entire community. So far we only have a BSC bridge for wrapped ZNN (wZNN/wBNB), no CEX has listed native ZNN anymore. We were on Mercatox / Stex / Crex24 until the alphanet launched in Nov 2021 and a DEX yet has to be built).

We believe Zenon and [CEX NAME] are among the very few remaining projects that truly follow the original cypherpunk ethos and given the die-hard holder base and growing developer and marketeer ecosystem, [CEX NAME] as the first CEX for “mainnet ZNN” would capture the majority of the trading demand. Plus, adding other ZTS tokens in the future, e.g. QSR “Quasar”, the second token of the dual-coin architecture, creates only marginal cost (just like adding another ERC20 token, just without transaction fees).

Thank you for your consideration, do not hesitate to reach out if you have further questions.

Looks good Shazz, thank you for putting this together.

Nice one Shazz. Hopefully we get some positive news.

Woo hoo! Way to go bro!! Let’s see if any of them bites

Nothing yet, will do Bybit next.

I’m afraid the complete lack of trading volume will make it very hard to get a cex listing at this stage but let’s see, maybe we’re lucky. 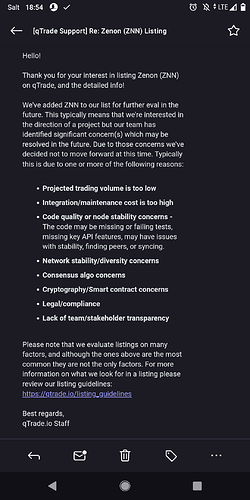 I’d love to find out which of those concern(s) they’re pinned on (if not all).

Volume. They simply can’t offset the listing and maintenance costs with fee revenues due to inexistent volume. All the other factors become negligible if volume is high enough (unless if its a straight out scam, maybe)

I was encouraged by a zenon OG to reach out to Coinbase and also got a direct email to ther listing dept. Apparently Coinbase is looking for leaderless DAOs that are community-governed and since Zenon pretty much fits the bill I gave it a shot - even if it’s a long one. At least they’ll have heard of us.

Very nice, would be amazing to spark some interest at coinbase!

Coinbase listing would be phenomenal

I know that tradeogre never answers when there is a request via the form. However, they respond very quickly via twitter.
I suggest you contact them via twitter, you will have an answer quickly.
https://twitter.com/TradeOgre

Yeah I know I’ve done that.

4. What are the pain-points that the project is trying to solve?
Zenon Network is working to solve some of the most fundamental issues facing decentralised networks. Unlike corporate web3, it achieves true decentralisation through its fair launch and by decoupling coinbase incentives from governance. It also eliminates transaction fees by tokenizing network bandwidth which is rewarded to those who help secure the network. Zenon is a hybrid PoW and PoS network, and aims at helping solve Bitcoin scaling by leveraging taproot as well as acting as a standalone L1 that uses Bitcoin’s PoW as root consensus. Rather than competing with Bitcoin as the hardest most secure currency, Zenon seeks to complement and add value to the Bitcoin ecosystem.

6. Who are the target users? (e.g. to the business partner or to the customers etc.)
Creators, operators, and users of mass-scalable, decentralized & centralized digital services in need for a feeless and trustless foundation that recycles the security and censorship resistance provided by bitcoin.

7. Please describe the main competitors of your project and provide us with your comparison with other products.
Unlike all corporate web 3 Layer 1 networks like Ethereum, Solana, Avax etc., Zenon

8. Please briefly describe the technical characteristics of the project and its business model features.
Zenon uses a dual-ledger architecture (Block-lattice + Meta-Ledger/DAG). Network participants have to lock up and burn high amounts of coins to run infrastructure in order to be eligible for protocol emissions. ZNN is used as a native currency and as collateral for validator infrastructure. QSR is tokenized transaction throughput and enables feeless transactions. Validators have to burn or lock-up QSR as additional collateral. These mechanisms create a trade-off between additional governance power vs maximization of ZNN and prevent validator nodes from compounding their say in the network without additional skin in the game.

9. Please describe the current and/or potential major partnership with your project
Zenon has a community fund set aside which includes the possibility to offer vested Pillars (major validator nodes) to strategic partners. All partnerships are community-driven.

10. Please provide a detailed project roadmap (i.e., technology and commercial development)
Please see on the zenon.network landing page. There will be one large network upgrade in November to transition from Alphanet to the fully-fledged network.

11. What level of development have you already achieved? (e.g., MVP/Alpha/Beta/Testnet/Mainnet)?
Transition from a placeholder chain (PIVX fork) to Alphanet launch in November 2021 after 4 years of network development. Full mainnet launch is scheduled for end of 2022.

6. If you have checked any applicable features in the previous question, please describe each applicable feature and how it is associated with the token/coin.
Governance: Validator nodes (Pillars & Sentinels) have to lock up large amounts of ZNN to participate in the network consensus and earn protocol emissions. In addition, delegators can add weight to Pillars’ voting power and influence their chances to find a momentum block and earn consensus validation rewards.
Staking rewards: Non-validating network participants can delegate ZNN to validator nodes (Pillars) who share part of the pillar rewards with them. Also, Stakers can lock up ZNN for 1-12 months to help secure the network. In exchange, they can earn QSR, the second network coin which is used for feeless transactions by fusing it to plasma (and back).
Payment: ZNN is the main network currency and will likely be the most used asset to purchase and pay for any service in the Zenon network ecosystem.
Liquidity: ZNN is used to create liquidity pools (together with another coin/token) for autonomous market-making used by DEXs. LPs receive part of the protocol emissions (ZNN & QSR) in exchange for providing liquidity.