I have recently written the content for bitcoin . com press release which was reviewed by them and confirmed with no other changes, so I was wondering to get your feedback as well on it.

I am trying to keep it simple and highlighting the Accelerator-Z, but at the same time explaining the main value proposition brought by Zenon and why it would be a great opportunity for new devs to join and build within the ecosystem.

In the article, there will be some backlinks to the website, and at the end of the article, people can land on the Telegram community or AZ page, all with dedicated links to track them.

From the use-cases and talks with the account managers, people mostly convert when you’re exposing some grant event, a launch, a campaign, a giveaway, and so on.

Zenon has launched Accelerator-Z, an up to 900K $ZNN & 9M $QSR on-chain funding program focused on accelerating the adoption and growth of its novel & recent ecosystem endowed with highly scalable, secure & feeless properties.

Zenon Network is a distributed dual-ledger technology also called the Network of Momentum due to its blocks called momentums.

The project is community-driven and has been getting large attention just before launching its first mainnet stage called Alphanet when working on BTC interoperability was announced.

Even though building BTC interoperability might take a while, here is a quick comparison between Zenon and other L1s to understand its already proven technological disruption: 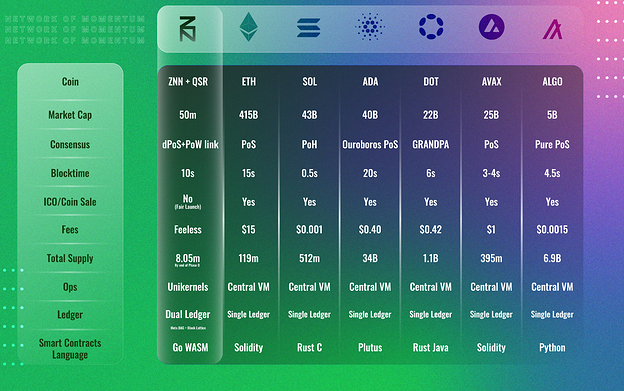 Via its dual-ledger formed by a meta-DAG & block-lattice, Zenon can reach massive throughput & superior scalability compared to traditional blockchains without compromising decentralization and the security of the network.

In a DAG, the consensus is not achieved in a straight line with a 1-to-1 connection between blocks; they can be like graphs where 1 block can confirm 3 blocks, and those 3 can confirm 3 more, etc. This makes reaching consensus in a DAG exponentially faster and more scalable than with traditional blockchains which are linear in consensus.

The entirely feeless paradigm of Zenon is given by the Plasma anti-spam mechanism that acts as network gas to confer no fees regardless of the participation or transaction type. The concept is simple: the more Plasma you possess, the higher transaction throughput you can achieve.

Plasma can be easily obtained by submitting a valid proof-of-work to add weight to the ledger, increasing the overall security of the network, or simply by fusing (stake/lock) QSR in return for a quantity of Plasma.

Join the Aliens within the Zenon ecosystem:

Zenon Aliens Community has a wildly entertaining & vibrant community that incorporates both the brightest & most degen aliens. The project retains ported SDKs in most programming languages.

Accelerator-Z DAO was designed to open the network’s development & marketing gates to any qualified entity to build products or services layered on the highly scalable, feeless, and secure ecosystem.

Thus, this DAO funding framework allows anyone to access funds only by submitting their project and reaching the majority of votes from the network’s pillars.

Join the aliens to decrypt the future!

Check out more on:

Will get back with the banner ads content zoon!

The project is community-driven and has been getting large attention just before launching its first mainnet stage called Alphanet when working on BTC interoperability was announced.

change to: The project is community-driven and the focus on BTC interoperability attracted a large amount of attention just before its first mainnet stage called Alphanet.

And I’d add to the paragraph discussing the DAG, at the end: The block-lattice is used to store settled transactions, and as an asynchronous network this allows for greater throughput and scalability.

You compare other projects existing features and tech with things that only exist for us in the whitepaper, if at all. Also maximum supply is not fixed. No good.

As far as I know, we’re missing unikernels & smart contracts with web assembly. I can maybe update the image or reposition it. Is there anything else I am missing?

We don’t have pow links and we had a coin sale for sat amounts. Not sure if you mention that elsewhere.
Also, as said, we don’t know the emission schedule but likely we don’t have a max, but maybe you meant current (is 8.5 current?)

Edit, and there’s no meta-“DAG“

No public team
There’s a pseudonymous core dev team but the project is leaderless / 100% community-driven.

A genuine DAO
There are no single decision makers. The community / public makes network development decisions and also funds individual developers through a decentralized accelerator that pays out ZNN & QSR grants to applicants via smart contract if key validator nodes (“Pillars”) reach a quorum. See Hyperspace x Accelerator-Z: towards a DAO of DAOs | by Zenon | Medium

Feeless paradigm
Zenon is the first network to introduce the feeless/gasless paradigm by tokenizing transaction throughput with QSR (by is temporarily fusing to plasma), thus enabling mass-scalability while eliminating network spam.

Progressive Decentralization at its core
The network is fundamentally designed to maximize decentralization in every aspect. It used a BTC bonding event with the same conditions for everyone and algorithmically refunded the BTC to all participants who committed at least 1 BTC in exchange for 5k ZNN and running a node with it for 1.5 years.

No insiders
No VC, presale or insider allocations were made. It was a 100% public sale / bonding event.

Zenon’s Vision - Scaling Bitcoin
Zenon was built since 2018 by uncompromisingly following the Bitcoin ethos with a very close focus on Taproot and Bitcoin interoperability.

Apart from being a standalone L1, Zenon aims at becoming a sustainable Bitcoin scaling solution by acting as a trustless rootchain for Bitcoin sidechains.

Initial Bitcoin interoperability will be achieved through Atomic Swaps, Merge Mining, Feeless Bitcoin Transactions by transacting BTC on the Zenon Network of Momentum.

Better… I don’t want to sound petty, merely out of curiosity: do we know that someone is building sentinels for phase 1 and what they will be used for? Regarding the coin sale, I was assuming only whole btc amounts were paid back, not everything above 1. Is that wrong?

Sentinels: Iirc that is part of phase 1 release, i.e. to be introduced by the core dev team during the transition from phase 0 to 1

Sentinel use cases (based on what I picked up):

Coin sale: Correct, xStakes applied to those who invested increments of 1 BTC in exchange for 5k ZNN AND while running a node for the entire time until they got fully refunded (1.5 years after the initial distro)

I’m not sure, but I thought only sentries were supposed to be released on phase 1, normally we should have sentinels working by now.