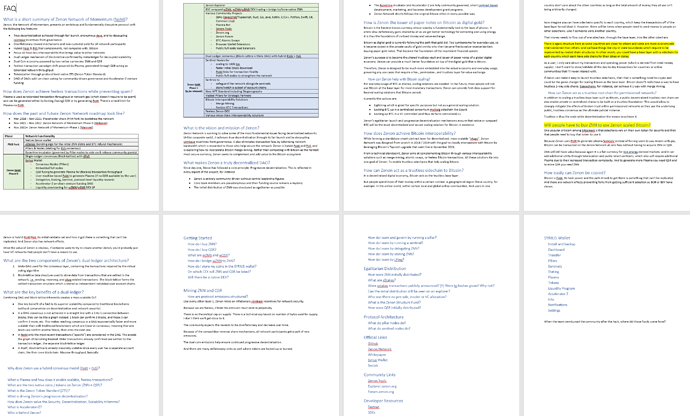 This is incredible work shazz. Are you planning on doing all of the remaining Qs there?

The advantages of a hybrid PoW & PoS system:

What is Zenon Network’s approach to the blockchain trilemma of security, decentralisation and scalability?

Zenon Network is still in its early stages, but the code is being progressively open-sourced and Dec 2022 the sentinels (a type of node) will join the consensus enabling massive scalability which can then be measured. At the moment though, the approach mentioned in the draft whitepaper is theoretical. The novel ideas and concepts proposed can be very briefly summarised as below:

Typically the main focus is on how to create a network that is highly scalable without compromising on either security or decentralisation. Regardless of details, it seems like an asynchronous network with functional sharding is the optimal general design.

Zenon Network’s proposed novel features to enable high scalability:
The block-lattice is for storing settled transactions, and as an asynchronous network enables greater throughput and scalability.
The meta-dag is for the consensus, and as a DAG, massive scalability is possible.
The consensus design is a BFT consensus algorithm that is leaderless (made possible via the interplay between sentinels and pillars, the Zenon nomenclature for two different types of nodes).
The smart contracts are done by leveraging unikernals, which embrace a single address space model which enables them to run at high speeds.

this is awesome!!! Cant wait to see a draft.

Who is behind Zenon?

A project with anonymous beginnings naturally leads to speculation. Popular sentiment is that OG Bitcoiners are likely involved. This is because not only has Zenon’s multi-year funding source been a mystery, but Zenon also follows a path of progressive decentralization that has observably been modelled by the values and ethos of Bitcoin.

The Zenon Token Standard (ZTS) refers to tokens created on Zenon Network. They are analogous to erc-20 tokens issued on Ethereum.

ZTS tokens provides a new, flexible and secure way for both developers & users to issue and manage tokens, which can be done with zero coding or programming skills directly from the SYRIUS wallet. They are native and interoperable at the protocol level. Token transactions are feeless, unlocking a new dimension of possibilities.

Hey @Shazz and @zyler9985 - let me know if you need help getting the FAQ over the line. I might edit the post later and add all the headings/links so that you guys can chuck the rest of the content in

Feel free to comment/markup and I’ll add your content here:

Sorry for the delay, wagie work was a bitch lately.

Also, given how much we stil have to learn about zenon it’s safe to say no FAQ will be conclusive anytime soon and will need to be constantly adjusted.

All good - partially complete is better than nothing at all