Best thing to do is to spam kaine on main chat before processing with removing liquidity, especially for large LPs.

We could show a step forward in the right direction by first taking care of non-LP’s (wZNN hodlers) via a push of the Bridge Deprecation Campaign. I think Kaine will be more willing to share info then.

The best way to push the campaign: Create pressure in the Telegram / Discord channels. Create the trend.

Guys, I just realized that we need to coordinate this with people who have TXs stuck in the ZNN > wZNN direction.

@Sigli I think we need to explain this to Mr. Kaine and ask him to help. How many other stuck TXs (ZNN to wZNN) are there?

I’m also thinking about people selling wZNN OTC. Once the old wZNN > ZNN bridge is expired, we need to be careful selling this OTC. It’s possible the wZNN will not be convertible to ZNN.

They can just swap back though

ZenonOrg’s pool share increased from 31% to 34% today. Some LP’s are swapping back to ZNN.

I believe Kaine mentioned an article or for more info to be released for LP providers on tg. I don’t see the need to rush and withdraw our liquidity until Team Sumamu’s bridge alternative is up and running. Tho I won’t mind if you guys wanna withdraw- that’ll vastly increase my daily bread 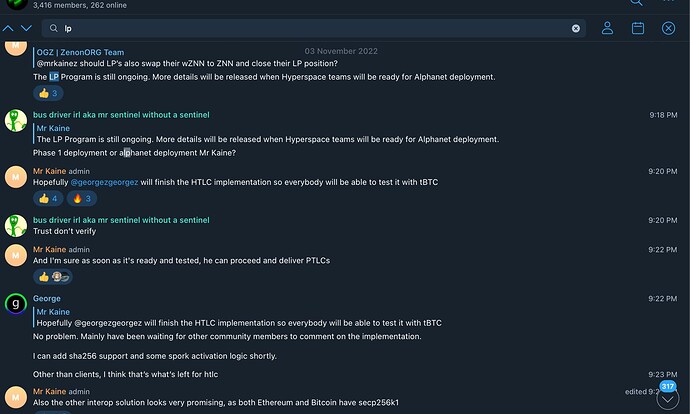 ya that’s my thinking too.

my rewards have gone up 2X since I started.

Man I have to say I greatly admire ZenonOrg’s commitment to the cause!

+1 There’s no guarantee but there’s still time. Kaine said that this will be a gradual process and that more information will be communicated shortly.

@mehowbrainz The last LP of a BSC wZNN will not have any problems unless their plans are to sell on PCS. Even if the pool is empty, you will be able to get out of your LP position, receive your wZNN & wBNB and subsequently swap your wZNN to ZNN on Syrius (bearing in mind that the bridge is still open at this time).

Yeah that’s the key, hopefully they acknowledge LPs holding their position to help a gradual transition for everyone.

Seems to match with other directives received recently in Telegram:

Mr Kaine on Jan 18, 2023
They should hurry up as we need to move on and make progress at a greater pace.
All devs are invited to open PRs until the end of February or earlier. After review, they will be merged and the community will need to coordinate for upcoming network upgrades.

Does this mean that the Orbital Program (Protocol Level Liquidity) begins then?

Would they make it exactly 1 year after the liquidity program began, on March 1st, 2022?